Except where otherwise noted, Co-here Locality Tokens by Jason Lee Lasky is licensed under a Creative Commons Attribution-ShareAlike 4.0 International License. 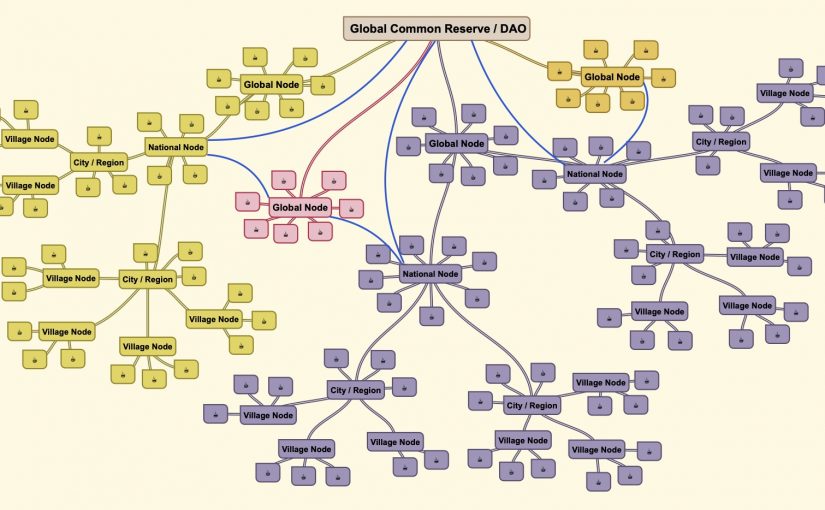 The Co-here Foundation will be responsible to manage development, operations (devops) and ecosystem incentives. The foundation will gradually increase the role of Co-hereDAO stakeholders through contribution channels, engagement and liquid democracy with quadratic voting (also “trickle fed” conviction voting).

These additional Local Tokens will be value matched with a parallel issue of Co-hereDAO staking tokens added to the Common Reserve.

Co-hereDAO staking tokens can be acquired with Local Tokens from the Common Reserve and converted back to Local Tokens via the decentralised locality nodes which each have their own liquidity reserves.

The total supply of Co-here staking tokens will be automatically reduced via buy back and destroy, funded by fees collected from collateral asset withdrawals and partial liquidation when staking tokens are converted to Local Tokens.

Maintaining an 80% ratio of stable assets in the reserve

To maintain a Common collateral reserve with at least 80% held in stable value assets, while the issuance of new staking tokens, which have a variable value, are initially added to the Common collateral reserve to offset the issuance of newly issued budgeted Local Tokens, when the non stable assets in the reserve are approaching the 20% maximum limit, a portion of non stable collateral will be converted to stable reserve tokens. This reduction in non stable collateral will allow new staking tokens to be added to the Common reserve.

Since this process is ongoing, as Local Tokens are issued on demand and destroyed on redemption of reserve, batches of new deposits of non stable collateral may be partially converted, say 60% to stable reserve. Since the Common reserve has a max ratio of 10% staking tokens, a portion of new non stable deposits could also be converted to top up staking tokens in the reserve.

Localised Nodes for staking and conversions

The Co-here Local Token network will be distributed through nodes at the four locality levels: global, national, city / regions and villages.

The global Common reserve will be setup and managed by the foundation. Other nodes can be setup at the global locality as well. Locality nodes at national, city / regions and villages will be prioritised for seed funding from allocated budgets. In stage 1 there is a budget for seeding locality nodes and seeding their conversion liquidity pools (during stage 1 & 2).

Node operators will be considered merchants providing technical and financial services. They can self nominate their operation and service area at a locality but will require proof of registration of appropriate business accreditation for operating in the jurisdiction. Node operators will need to stake and maintain a minimum amount of Co-hereDAO stake tokens and stake Local Tokens in a liquidity reserve for local node conversions.

The Co-here wallet will provide a directory of registered nodes with statistics and the facility to delegate staking tokens and track rewards. Rewards are drawn from fees and distributed as Local Tokens. Stakeholders will be able to withdraw or convert staking tokens and Local tokens in the node locality node liquidity reserve. Stakeholders will be able to stake in the node locality liquidity reserve and collect locality conversion fees.

Node operators maintain a minimum stake as well as the technical operations. Staking token holders delegate to nodes up to the maximum stake limit. There may be several nodes at each locality. If they grow too large they could split in to two or designate to a higher locality.

Limits are placed on stake pool sizes and rewards for each node at each level, between min and max range, to encourage decentralisation, load balancing between nodes + liquidity pools at each level and reduce price speculation.

See Looking ahead to Stage 4 – localisation as decentralisation